China’s flagship foreign policy engagement programme, the Belt-Road Initiative (BRI) and its technological component, the Digital Silk Road (DSR), have garnered much attention in policy and research circles. As the prime manifestation of China’s ambition to play a greater role in the global digital sphere, the DSR has led to questions concerning whether Beijing might use it as a conduit to export its political system or approach to digital governance, as well as concomitant values, to gain a greater role in global digital standard setting processes, and what its competitive impact is for Western governments and technology companies.

The answer to these questions is, however, often not borne by detailed empirical analysis. Perhaps most importantly, the vast majority of existing analysis of the DSR is primarily Beijing-centric, focusing on the objectives and intentions of the Chinese leadership, and paying comparatively scant attention to the local environment of countries affected by the DSR. Nevertheless, the perspective of DSR-affected and recipient countries is crucial.

This report provides a four country-level studies of perceptions of the DSR. While the four countries obviously differ considerably on numerous counts, it is nevertheless possible to derive the following general findings with regard to their perspectives on the DSR. First, in none of the four countries has the notion of the “Digital Silk Road” entered the domestic political discourse. Second, the DSR is not considered to be a comprehensive, multilateral programme. Even so, the question how to engage with China on digital issues is an important one in domestic policymaking. Unsurprisingly, all governments surveyed intend to develop strategies in pursuit of their own perceived national interest.

These conclusions have important implications for observers and policymakers. First and foremost, they should move away from the Beijing-centric model that has dominated the debates so far, and take the agency and interests of affected countries into greater consideration. Second, they should take note that the DSR is not simply a competition between the US and China fought out in neutral territories. Third, even though the DSR may well be less of a national strategy than advertised, it nevertheless is the case that China’s digital footprint does pose competitive challenges to Western governments, for local governments’ favour, and for Western businesses, for their markets. 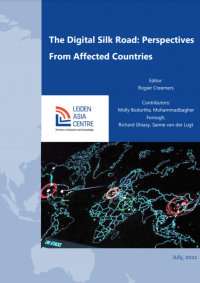 Earlier publications within this project

Russian Perspectives on China as an Actor in Cyberspace (Jan 2021)