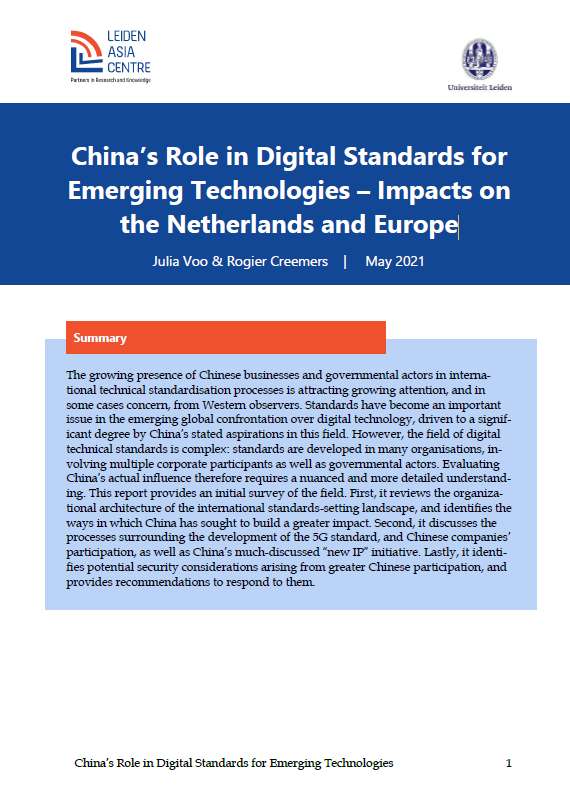 LeidenAsiaCentre researcher Dr. Rogier Creemers and Julia Voo have published a new report as part of the China’s Role in Cyber Security project.

In the report, titled “China’s Role in Digital Standards for Emerging Technologies – Impacts on the Netherlands and Europe” , Creemers and Voo discuss how the growing presence of Chinese businesses and governmental actors in international technical standardisation processes is attracting growing attention, and in some cases concern, from Western observers. Standards have become an important issue in the emerging global confrontation over digital technology, driven to a significant degree by China’s stated aspirations in this field. However, the field of digital technical standards is complex: standards are developed in many organisations, involving multiple corporate participants as well as governmental actors. Evaluating China’s actual influence therefore requires a nuanced and more detailed understanding.

The report provides an initial survey of the field. First, it reviews the organizational architecture of the international standards-setting landscape, and identifies the ways in which China has sought to build a greater impact. Second, it discusses the processes surrounding the development of the 5G standard, and Chinese companies’ participation, as well as China’s much-discussed “new IP” initiative. Lastly, it identifies potential security considerations arising from greater Chinese participation, and provides recommendations to respond to them.