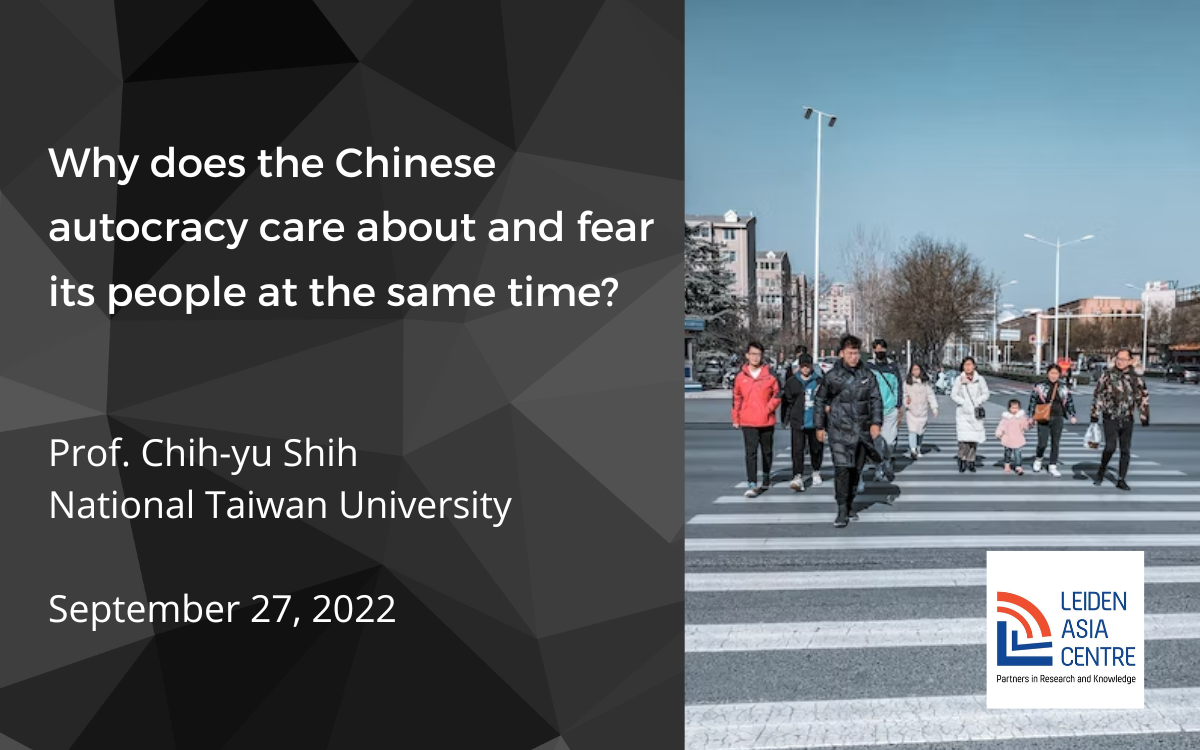 Lecture and Q&A: Why does the Chinese autocracy care about and fear its people at the same time?

Note: this event will not be livestreamed. The lecture and Q&A will take place in-person in the Auditorium of Leiden University College.

In the eyes of the western democracies the governance style of the Peoples Republic of China has taken the path towards autocracy. The communist party rule since 1949 has seen more and less autocratic eras and it is the firm conviction of many observers that the President and the Secretary General of the CCP, Xi Jinping, is now consolidating his power in order to finalize the process towards a full-fledged autocratic government. The XXth Party Congress, to be held this Fall should function as the platform for Xi to achieve this.

On September 27 Professor Chih-yu Shih (National Taiwan University) will argue how autocratic leaders consider to achieve at least a passive acceptance by their subjects or citizens of this undisputed form of reign. Does that render some kind of agency for the ‘people’ and how is that being reflected upon by the autocratic leader?

Professor Chih-yu Shih teaches China studies, anthropology of knowledge, and international relations theory in the Department of Political Science at National Taiwan University. Determined to recollect and re-present intellectual heritage in Asia, he has devoted his academic career for the past 30 years to researching, teaching, and writing on the cultural and political agency of human society. Shih’s publications consistently challenge the mainstream views on the law of human behavior and gather evidence of human agency from ethnic communities, developing countries, people in poverty, and so on. In his writings, Shih pays attention to the cultural meanings of civilizational components such as religion, language, ecology, and institution. He practice a multi-sited methodology reified primarily through field interviews, oral history, and archive research.

Lecture and Q&A: Why does the Chinese autocracy care about and fear its people at the same time?

Registration:
Via the grey box below the image of this page. Entrance is free.