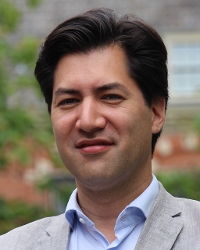 Vincent Chang is a Dutch a researcher and a lecturer at Leiden University. After a work placement in China, Vincent left his career as a lawyer at a leading international firm to pursue his latent passion for Chinese studies, earning a PhD degree in 2016 for his research on China’s modern diplomatic history. As a consultant, since 2008, he has been advising Dutch government agencies, knowledge institutions, cultural organizations and private companies on their activities in fast-emerging inland regions of China. During this time, Vincent held several university positions in the Netherlands and China. Apart from academic works, his research has inspired various special publications, television documentaries, exhibitions, and public events on Netherlands-Chinese relations.

At the LeidenAsiaCentre, Vincent’s research will focus on Chinese attitudes toward diplomacy and international law in the context of China’s bilateral relations with the EU and the Netherlands. In a first project, Vincent will investigate how Chinese policy makers, diplomats and academics view the European Union and the development of China-EU relations after the recent crises in Europe and against the background of the changing global order. A second project will examine the place of international law in the modern diplomatic discourse between the Netherlands and China since the two sides established official relations. Both projects, each from different angles, seek to clarify the strategic implications of China’s rise and inform European and Dutch policy responses to rapidly changing realities in an increasingly ‘Chinese’ world.

The research for these two projects will comprise both desk research and related field work. The first project will entail a wide analysis of public sources, including recent Chinese policy documents, official statements, press reports, and academic literature, combined with a series of semi-structured interviews with policy makers, diplomats and expert observers in China and Europe. The second project will draw from historical research of archival records in the Netherlands and China, and from current scholarship in relevant fields of international law.

Vincent Chang and Frank Pieke, China, the EU and the Netherlands – A Chinese Perspective. The authors published a related article in Asia Europe Journal.

Putting Europe Last?, an analysis of the 2019 Dutch policy paper on China and the surrounding debate by Vincent Chang.

China, the EU, and the Netherlands