The LeidenAsiaCentre and the EU Centre in Singapore organised a conference on the Belt and Road Initiative (BRI) at the Nanyang Technological University (NTU) in Singapore on January 16 and 17. The two-day event centred around the LeidenAsiaCentre’s Global Perspectives on the Belt and Road Initiative research project. Under the leadership of the EU Centre’s dr. Yeo Lay Hwee, the conference gave both speakers and audience members an opportunity to discover new views and ways of thinking regarding the development of the BRI. The conference was also a clear indication of how intellectually challenging the final report of this research project, to be published in May, will become. 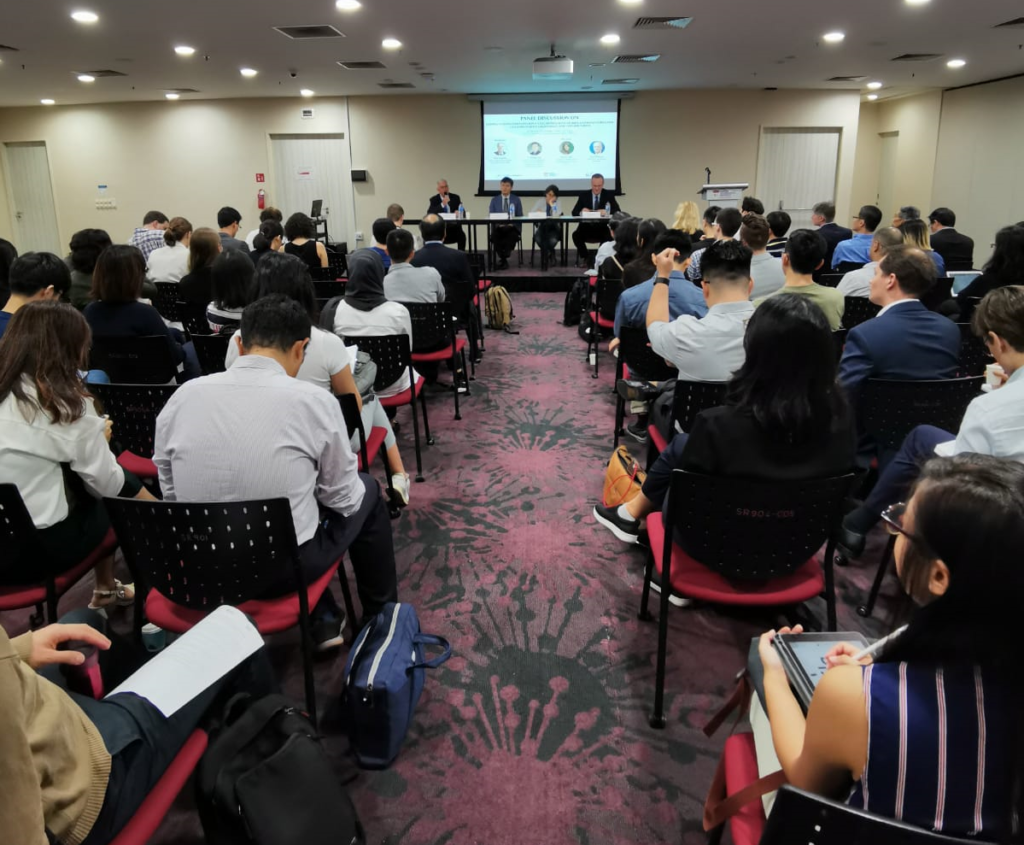 The first day of the conference consisted of two closed sessions during which the LeidenAsiaCentre’s research project was the topic of discussion. Many of the involved researchers presented their preliminary findings and discussed the project’s progress and goals. After a warm welcome by dr. Yeo and dr. Florian Schneider (director of the LeidenAsiaCentre), dr. Matt Ferchen was the first of the LeidenAsiaCentre researchers to speak, immediately tackling the issue of global implications of the BRI by taking a bird’s eye view. Following up with a more detailed approach, dr. Frans-Paul van der Putten spoke about the involvement of Indonesia and the effects of the BRI in this country. Staying in the South Asian region, dr. Richard Ghiasy explained how the BRI has affected India and Pakistan. Connecting these various perspectives, prof. Cheng-Chwee Kuik of the National University of Malaysia summarised the afternoon’s speakers’ presentations excellently. This led to a lively discussion between the invited participants and the speakers that ended the first day’s morning session.

The afternoon session started off with dr. Ingrid d’Hooghe, who spoke about domestic Chinese perspectives on the BRI. Providing a detailed overview of the institutions and economics of the BRI, dr. Jue Wang emphasised the need to understand the organisational workings behind the Belt and Road. Ernesto Braam, the Regional Strategic Advisor SE Asia from the Embassy of the Netherlands in Singapore, who himself is not involved in the project as a researcher, concluded the afternoon session. Presenting a personal view on the discussed perspectives, he challenged the researchers to think about how the research project can advance, focusing on the divide between geographic and thematic perspectives on the BRI. Another lively round of discussion concluded the first day of the Global BRI conference. Not all LeidenAsiaCentre’s researchers involved in this project were able to attend the conference. Short video interviews in which they introduce their researches within the project are available here.

The second day of the conference consisted of a public session, during which experts with different backgrounds discussed varying aspects of the BRI. The session attracted over 100 participants, ranging from university and think tank researchers, to ambassadors and government representatives. The event was moderated by dr. Ben Knapen, Dutch Senator and Chairman of the LeidenAsiaCentre’s Supervisory Board, who asked the panel members to reflect on the global nature of the BRI and to discuss with the audience how this megaproject can be defined.

Prof. Haruko Satoh of Osaka University spoke first about how one of the most important regional players is often overlooked in BRI discussions: Japan. She discussed the position of that country regarding the development of the East Asian region and emphasised that the BRI is seen as a competitive development model from the perspective of Japan. Associate Professor Li Mingjiang of NTU thereafter argued that the BRI is not only implemented for geopolitical reasons. In fact, he posited that it’s mostly economic reasons that form a country’s motivation to join the BRI. Bert Hofman, director of the East Asian Institute at the National University of Singapore (NUS) and former World Bank country director for China, argued that a single definition will not suffice in order to understand the BRI. 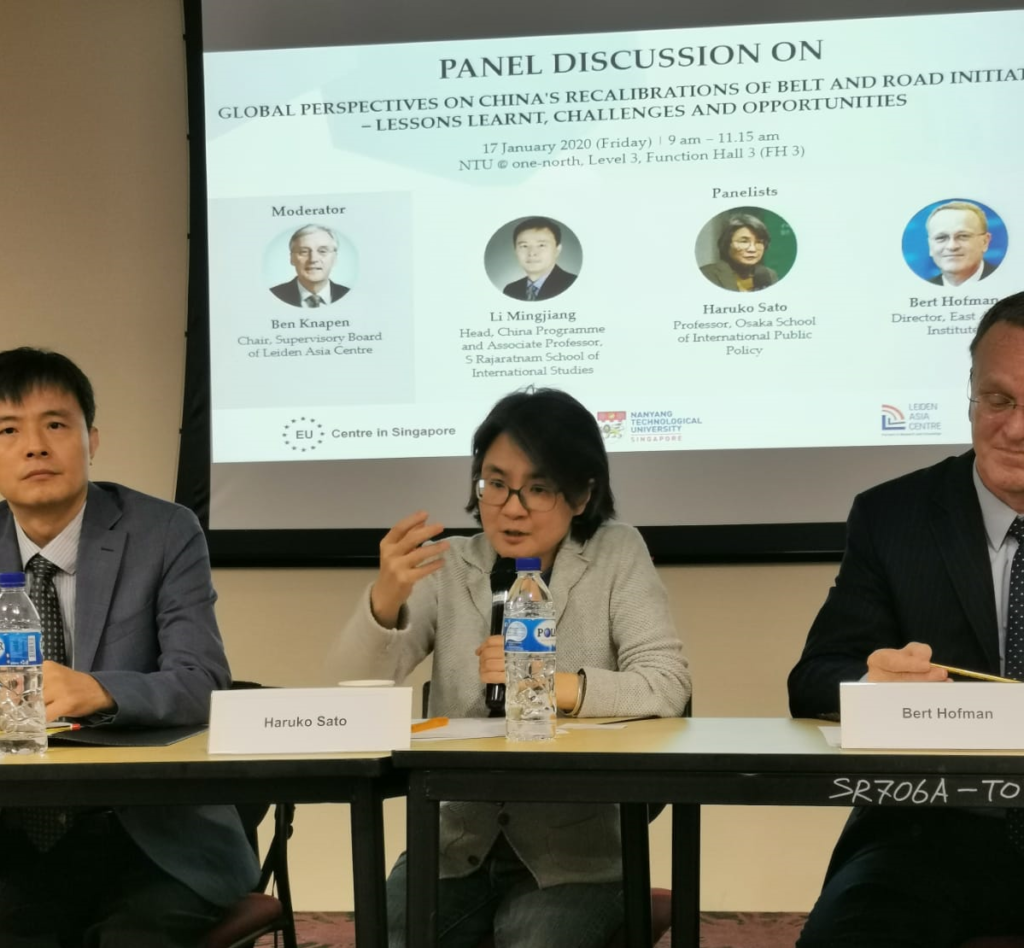 The lively discussions between audience members and the speakers included topics such as big data security, regional cooperation, and national interests. Referring to  the example of the Philippines, prof. Satoh highlighted the ability of South East Asian nations to balance their interests among regional powers. This position was lively debated, as the Ambassador of the Philippines in Singapore, who had accompanied President Duterte to BRI related meetings with Chinese President Xi Jinping, was present at the event. He provided an inside perspective into his country’s position regarding the BRI, which came about through a coincidental sequence of decisions. Emphasising the need for better data security, dr. Li described how a lack of global governance is undermining this issue. Following up, Bert Hofman explained that the backbone of the BRI is government to government cooperation, and that companies only become involved in its slipstream.

Concluding the event, dr. Schneider thanked everyone for their participation and in particular Lay Hwee Yeo and her staff from the EU Centre. Importantly, he noted, the global perspectives presented here in Singapore point towards the need for more nuance in BRI debates. However, he continued, ‘we need to put nuance to work for practical purposes.’ With this remark, the two day conference came to a successful end, and many participants expressed their desire to read the outcome of the project expected to be presented in May this year as a report, and later in summer as an edited volume published with Amsterdam University Press.