The LeidenAsiaCentre, in cooperation with the Taipei Representative Office, organised multiple events on November the 18th surrounding the visit of Taiwan’s Digital Minister Audrey Tang. An expert session as well as a keynote speech by the minister, which both addressed the topic of Civic Movements in Taiwan and Hong Kong, were held in The Hague.

The afternoon expert session consisted of two presentations and discussions and was attended by 25 invited guests. In the first session, Audrey Tang, who officially is a minister without portfolio, discussed the contribution of digital civic participation in democratic politics, after which she took questions and entered into discussion with the experts, including discussant Florian Schneider, director of the LeidenAsiaCentre. During the second session, Heidi Wang from Keele University presented her views on the recent unrest in Hong Kong. This resulted in fruitful discussions, including regarding the position of international business in Hong Kong and the competing narratives that appear in the media about the protests. LeidenAsiaCentre’s Ingrid d’Hooghe served as the discussant during this session. 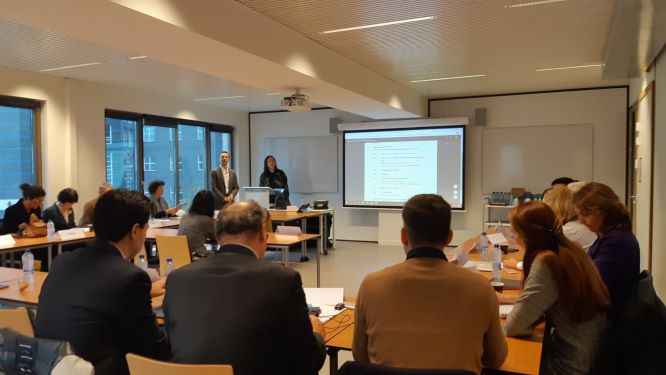 In the evening, minister Audrey Tang gave a public keynote speech at press centre Nieuwspoort, titled “Disarming Disinformation through Digital Democracy”. The announcement of this event had generated a lot of attention, which resulted in the room at Nieuwspoort reaching its capacity long before the event took place, despite the fact that the venue had already been expanded. Almost 200 attendees joined the event, including researchers, policymakers and students.

After an introduction and welcome by Hsin-Hsin Chen, the Representative of Taipei in the Netherlands, Minister Audrey Tang discussed the methods that she and her team had come up with to improve democracy in Taiwan through digital means, which included stimulating dialogue between government and citizens, radical transparency, and including the public in the policy making process. At the same time, Tang also explained which solutions were being deployed in order to counter threats in the digital sphere. For example, she demonstrated how disinformation campaigns are defused through humorous counterexamples which ridicule the way such campaigns work.

The minister herself stayed true to her mission and included the audience into her speech by offering them the opportunity to ask and up-vote questions anonymously (and digitally, of course). This resulted in the surfacing of questions which were shared by many audience members. Through offering various practical examples, often accompanied with visual material, Tang responded extensively to these questions. After the end of the speech, many attendees stayed for drinks at the venue.