The LeidenAsiaCentre and Chatham House organised a two-day event on the evolving role of China in the global economic governance. On November 21st, a public round table discussion took place at press centre Nieuwspoort, while the next day was full of expert panel sessions at Leiden University’s Campus The Hague.

During the public round table, the focus was specifically on what to expect in the future of China’s engagement with global economic institutions. Four experts were invited to discuss this issue among themselves and with the audience: Bert Hofman (East Asian Institute, National University of Singapore), Huang Yanzhong (Council on Foreign Relations and Seton Hall University), Mike Sampson (Leiden University), and Wang Jue (Leiden University and Chatham House). Some of the issues they presented their views on include how China’s institutional needs shift as its economic needs and political ambitions grow, whether China can fulfill the role of a responsible leader of global economic governance, and how western-led multilateral economic institutions can effectively transform their relationship with a rising China. After the presentations, it was up to the audience to raise questions, which touched topics including the stance of the Chinese government towards digital currency and the role of the Belt and Road Initiative within China’s approach to multilateral economic institutions. Chatham House’s Champa Patel, who served as the chair of the panel, made sure that every question was answered thoroughly by the experts. 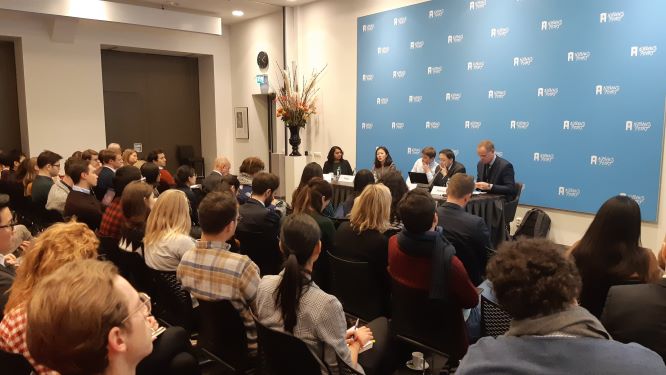 The public panel session generated a lot of interested and an at capacity venue.

The event continued the next day with an expert session under Chatham House Rules which consisted of several panels that addressed specific topics within the broader theme of China’s role in global economic governance. The first panel, with experts from several universities from different countries, discussed China’s approach to wider global governance issues, such as climate change, public health and cyber security. China’s role in the World Trade Organisation and global trade governance was the central topic of the second panel, which included experts from universities as well as from a Dutch ministry and an international economic institution. The final panel consisted of experts from two different universities and from another Dutch ministry. The topic at hand was China’s collaboration with international development finance institutions, such as the World Bank, ADB, EIB, EBRD, and IFAD. The panel sessions resulted in extensive discussions among the experts and interesting insights which Mike Sampson and Wang Jue, two researchers from Leiden University, will use in their research on this topic.

The session on November 22nd included many experts from different, both academic and practical, backgrounds