LAC Shorts: With Fumio Kishida at the helm, Europe can no longer ignore Japanese security

LAC shorts are articles written by or interviews conducted with LeidenAsiaCentre researchers on important current developments in Asia.

Only hours after Russia invaded Ukraine in the morning of February 24th, Japanese Prime Minister Fumio Kishida told a group of reporters he is committed to keeping the international order and that Japan will coordinate its response in line with the international community, particularly the G-7 states. Subsequent response that Kishida rolled out was “surprisingly decisive and coherent”[1] considering he came to power only 6 months ago in October 2021. Kishida demonstrated that Japan not only stands firm with those condemning Russian aggression, and that it also would act in concert with them to prove its resolve.

Notably, the usually reticent Japan broke out of the habit of resorting to chequebook diplomacy (as it did in the 1991 Gulf War I) in assisting allies in on-going conflicts. By sending Ukraine materials such as “drones, bulletproof vests, helmets, winter battle dress uniform, tents, cameras, hygiene products, emergency rations, binoculars, flashlights, [and] medical equipment”, the country sent a clear signal of support for Ukraine, thereby allying itself with Europe and the US.[2] Japan also joined in when the G7 issued a joint statement that said: “we commit to phase out our dependency on Russian energy”.[3] The commitment to ween the participants’ economies of Russian energy symbolized a unified response to the Ukraine crisis. And, to an extent, Japan has attempted to coordinate its policies vis-à-vis Russia in accordance with the G7, even before this statement, by, for example, vowing to stop coal imports.[4]

For Europe, the country’s current stance, one that is rare among Asian nations, signals an important point: Japan remains one of the few allies willing to directly cooperate on security issues, and will consequently become an increasingly valuable strategic partner in the region. Moreover, not since the SS-20 missiles in the 1980s has Europe and Japan shared a tangible common security concern in Russia in an increasingly bifurcating international environment.

Japan’s response was at first focused on domestic vulnerabilities, including assessing the situation, ensuring the safety of Japanese nationals in Ukraine, and importantly, to “[k]eep the negative impacts upon Japan’s economy and society to a minimum, including by engaging in all possible means to ensure a stable supply of energy.”[5] As in Europe, the energy security issue weighs heavily on the government’s decision-making, as the country is heavily dependent on foreign imports of oil and has. Still around 9 in 10 barrels of oil, and one fifth of its gas, are imported from the Middle East. Albeit still modest in terms of overall share, Russian energy has come to play an increasingly larger role in the national energy mix, especially following the shutdown of most of the country’s nuclear power plants following the nuclear reactor meltdown in Fukushima in the 2011 Tohoku earthquake. Currently a little less than four percent of Japan’s oil imports and around 8.7% of its gas imports hail from Russia. Moreover, most of these imports come from one specific region: the Sakhalin Island just north of Japan.

There are two major resource development projects near the island, with Japan holding a 30% of the stake in the Sakhalin-1 project, of which half is government-owned, and private Japanese companies Mitsui & Co. and Mitsubishi Corporation holding a combined 22.5% in the Sakhalin-2 project. Early on, the Japanese government had made clear that its intent was to remain in the project, a statement made in response to Western oil companies pulling out.[6] This was by and large to protect Japan’s energy reserves, and to make sure China did not move into the projects in their place. And true to their word, in spite of Russian pressure and the 8 May G7 joint statement,[7] and in spite of a more recent attempt by the Russian government to take over the Sakhalin-2 project, Japan is trying to remain in the Sakhalin-projects— albeit in tougher and unpredictable conditions.[8]

Nonetheless, the Kishida administration’s response vis-à-vis Russia hardened significantly as the conflict developed. Although initially hesitant to jump on board, the sweeping economic sanctions imposed by European nations and the United States, Japanese public support for a tougher stance enabled PM Kishida to take a hard line. Currently, Japan has frozen the assets of eleven Russian banks and their subsidiaries, excluded Russia from the global SWIFT financial messaging system, prohibited the buying and selling of Russian bonds, and directly targeted President Putin’s and his close associates’ financial reserves. In this regard, Kishida appeared to take little heed to the cautionary voices within his Liberal Democratic Party (LDP) on taking a hard stance against Russia at the expense of any improvements in the beleaguered bilateral relationship that the late, former prime minister Shinzo Abe claimed to have made while he was in office for 8 years (2012-2020).

Japan and Russia have failed to conclude a peace treaty since 1945, and there is a long-standing territorial dispute over the four islands (northern territories) in the Kuril Island chain that the Soviet Union occupied after Japan had already surrendered. Under Abe, economic pragmatism took over while territorial negotiations effectively stalled. A growing number of Japanese companies opened offices and stores in Russia, and the Sakhalin projects were the symbol of this. But Russia has now terminated the peace treaty negotiations, in retaliation to Japan’s joining Western sanctions, with the Kremlin even commenting that the bilateral talks were largely symbolic and simply a ‘ritual’, making the political relationship even more tense.[9] Japan has thus experienced the same unilateral changes in the status quo by Russia as European nations have over the past year.

Moreover, the Ukraine crisis has enflamed public fears within Japan on regional security as well, especially regarding China. Conservative former Prime Minister Shinzo Abe, who was assassinated on the eve of the upper house elections in July, has repeatedly stoked these fears by, for example, stating on national television that Japan cannot stand by idly if China decided to attack Taiwan.[10] Although they do not reflect the official government stance, Abe’s remarks are an expression of a broader public fear of increased Chinese assertiveness in the region, as demonstrated in the recent Chinese reaction to the visit to Taiwan on 3 August by the US Speaker of the House of Representatives, Nancy Pelosi. A Nikkei survey from February showed that 77% of Japanese respondents feared that China would undertake military action to assert its position on Taiwan following the invasion of Ukraine.[11]

Accordingly, within the LDP, the crisis has pushed security hawks to propose a substantial increase of around 70 billion euros in the national defence budget, nearly double the previous number and at the level of 2% of the GDP.[12] PM Kishida has also taken the opportunity to pursue his long-term goal of restarting nuclear power plants, in a bid to loosen the grip of foreign energy on Japan.[13] Both of these policies had been long-standing goals of their respective proponents. The Ukraine crisis became the catalyst for Kishida to strengthen Japan’s security posture, by deepening diplomatic ties with countries in the region, the United States, and Europe, all the while balancing its economic interest in Russia and remaining vigilant of China’s moves. The US President Joe Biden’s visit to Japan and South Korea in May signalled to China of America’s involvement in regional security, despite its increased attention for Ukraine and engagement with NATO.[14]

Japan, in turn, has chosen to diversify its security aims, and has taken the Ukraine-crisis as an opportunity to deepen its strategic ties with Europe. “As Japan supports collective efforts to defeat Russian aggression in Europe, it is also investing in a future European role in the region closer to home,” according to Sheila Smith of The Council on Foreign Relations. In a historical visit, Japan’s Minister of Foreign Affairs Yoshimasa Hayashi has attended the 7 April NATO meeting in Brussel, indicating its intent to collaborate with European nations. In an official press release published shortly after the visit, Hayashi articulated that position clearly when he stated that “the security of Europe and the Indo-Pacific region cannot be discussed separately. Now is the time to strengthen cooperation between NATO and its partners, including Japan.”[15] Likewise, Kishida himself attended the Shangri-La Dialogue in Singapore—the first time in 8 years since Abe attended as prime minister—to deliver a keynote to the international defence community. These actions indicate Japan’s attempts at forging better ties with allies across the globe when it comes to security issues, a development that Europe cannot ignore.

Can Kishida fill in the “void” that the death of Abe has left at a time when the liberal international order is under the gravest challenge yet? This seems to be the predominant question cast upon this moderate Japanese prime minister. Abe’s legacy is in the realm of Japan’s foreign and security policy, where he has enabled the country to take a more active role in international security. This includes the reinterpretation of the constitution to allow Japan to exercise the right to collective self-defence. In other words, Japan can now fight alongside its allies, if need be. Kishida’s response to the war in Ukraine clearly benefits from this legacy. But to suggest that Abe’s shoes are too big to fill by anyone is to conveniently ignore the nationalist side that pandered to the neo-conservative US agenda. Under Abe Japan could not shake off international headlines that it was ready to remilitarise because of his revisionist view on history.

With enhanced security policy options but with less ideology, Kishida, who hails from Hiroshima, might turn out to be the right leader to be in charge of navigating the country in rough international waters. Consequently, Kishida has possibly taken the helm at the right time for Europe to deepen its security engagement in Asia, as there remain few countries in the region that share similar values and concerns. A point that European policymakers need to be acutely aware of, as Japan’s national security is crucial for maintaining global security.

[2] The Government of Japan, “Japan stands with Ukraine,” 20 June 2022, https://japan.kantei.go.jp/ongoingtopics/pdf/jp_stands_with_ukraine_eng.pdf.

[5] Kantei, “Instructions by the Prime Minister regarding the Situation in Ukraine,” Cabinet Decisions and Other Announcements, 24 February 2022, https://japan.kantei.go.jp/101_kishida/decisions/2022/_00006.html. 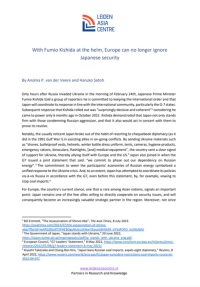