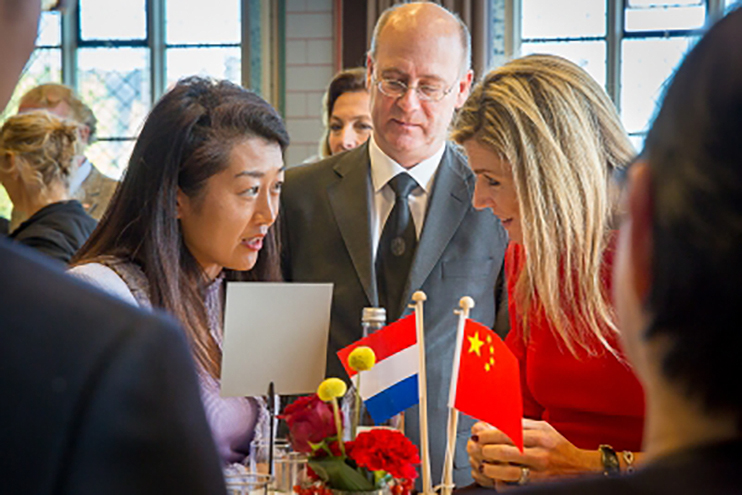 King Willem-Alexander and Queen Máxima attended a meeting at Leiden University on 1 October to prepare for their state visit to China. China experts informed them about such topics as the image that Chinese people have of the Netherlands.

During the meeting experts spoke of the different links between China and the Netherlands. Rector Magnificus Carel Stolker welcomed the guests to Leiden’s Academy Building and talked of the importance of China, both for the Netherlands and for the University. Chinese students, whose numbers run in to the thousands, currently make up the largest group of non-European students in the Netherlands. Leiden University is the only university in the Netherlands with a sinology programme, a study that attracts around a hundred first-years every year.

Media consultant Bei Wang told the King and Queen that the Chinese are better informed about the Netherlands than Dutch people realise, and they regard the Netherlands as an innovative society. Ms Wang gave some examples of Dutch topics that are popular on Chinese social media, from the young world-improver Boyan Slat who wants to clean up the oceans to the report that Dutch children are the happiest in the world. ‘Chinese people are curious and they look at how the Dutch handle different things, as a potential source of inspiration.’

At the same time it is important to realise that there are some things that Chinese and Dutch people approach differently. Koos Kuiper, who works as a court interpreter and also as curator of special collections at Leiden University, pointed out a number of these differences. As an example, Chinese people in the Netherlands rarely turn to government authorities for assistance; they are more likely to help one another. For them, working ‘black’ (without paying tax) is much more common if it makes the difference between working and not working.

Entrepreneur Lasé Hu, founder of a Chinese business club in the Netherlands, speaking directly to Queen Máxima, emphasised that second-generation Chinese people in the Netherlands are important bridge-builders between the two cultures. In the Netherlands they are the ambassadors for China, and vice versa in China. ‘People with a bicultural identity can strengthen society. Queen Máxima can attest to this.’ The Queen nodded in agreement.

Hans Crum, Vice-Principal of a school (the Gemeentelijk Gymnasium) in Hilversum, explained why his school is the first to offer Chinese as an examination subject. ‘It is important that the curriculum should become globalised; we have to stop thinking only in Eurocentric terms. The exchange programme between Chinese and Hilversum pupils has led to new insights. ‘Chinese pupils, who are generally only children, said they have learned a lot from Dutch family democracy in which parents are continually negotiating with their children.’

Hotel entrepreneur Gabriëlla Esselbrugge explained how she helped make Giethoorn a popular destination for Chinese tourists: by taking the wishes of Chinese visitors more into account, she has put the town on the map. One of her examples brought a smile to the faces of the Royal couple: Chinese people are apparently mad about pea soup for breakfast.

After the various presentations, the King and Queen talked privately with a number of researchers at Leiden University, including Anne-Sytske Keijser, lecturer in Chinese Language and Culture, and Claire Smulders, lecturer in Mandarin in the teacher training programme. A number of current and former China correspondents, including Bettine Vriesekoop and Garrie van Pinxteren, also talked about their experiences.

Personal stories behind the numbers

At the end of the session, King Willem-Alexander and Queen Máxima thanked the Leiden professors of sinology Frank Pieke and Maghiel van Crevel, who had organised the programme. Pieke reflected on the meeting: ‘They found the speakers informative and interesting. Our trade figures with China are public knowledge, but you can focus your questions better if you know some of the background to the numbers. We wanted to use personal stories to show how important China is in the Netherlands and vice versa.’

The state visit will take place in the last week of October 2015. Minister Koenders of Foreign Affairs will also be making a state visit to China at the same time, and will be travelling with a broad economic mission. Given China’s rapid modernisation, the aim is to discuss ways the Netherlands can contribute to ‘sustainable urbanisation’ across different fields. The state visit will focus on such areas as cooperation in agriculture, horticulture and landscape development, e-commerce, sport and design.