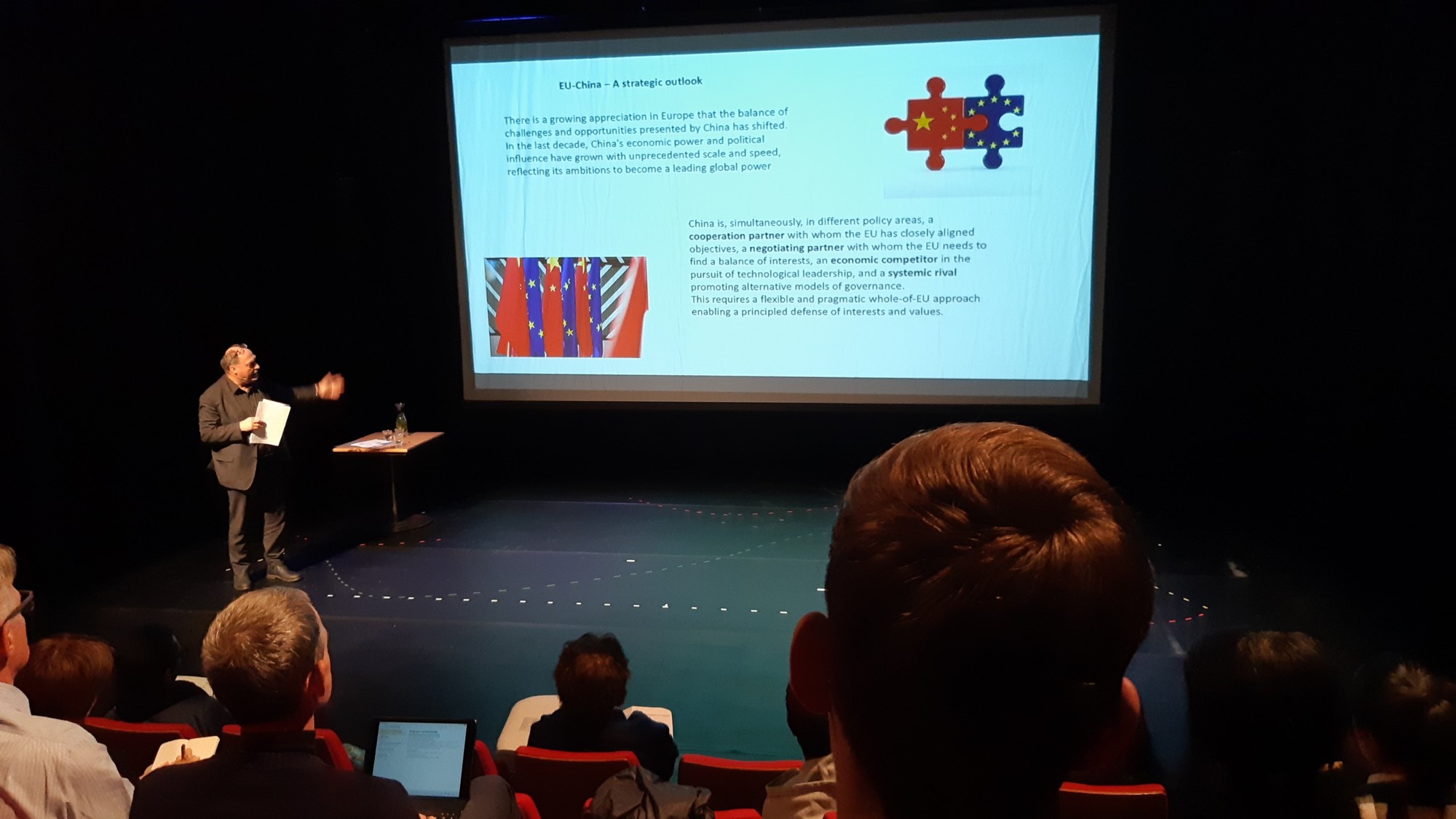 On November 5th, the LeidenAsiaCentre organised an interactive China lecture. At the National Theatre in The Hague, students were challenged by René Cuperus, Senior Associate Fellow at the Clingendael Institute for International Relations, to design their own China strategy.

The event started with a lecture by René Cuperus on the two faces of modern China, in which he demonstrated the complicated and multifaceted development of China. According to Cuperus, Asian countries, especially China, are developing at a much faster pace compared to the time when European countries started to do so. For example, the Chinese city of Shenzhen has grown within decades from a small rural town to nowadays one of the world’s mega cities with over 15 million residents. In addition to China’s national development, the county’s influence is simultaneously growing in the European region. Cuperus pinpointed various roles China can play when it engages with the EU in different policy areas. The country can be a ‘cooperation partner’ when some of its objectives are closely aligned with those of the EU. However, China can also be a ‘systemic rival’ and ‘economic competitor’ when it provides alternative economic and governance models. Through examples as such, Cuperus explained that China has grown with unprecedented speed in the last decade, especially regarding its economic and political power. He concluded his presentation by stating that a decent China strategy reflects the complexities of China’s development. 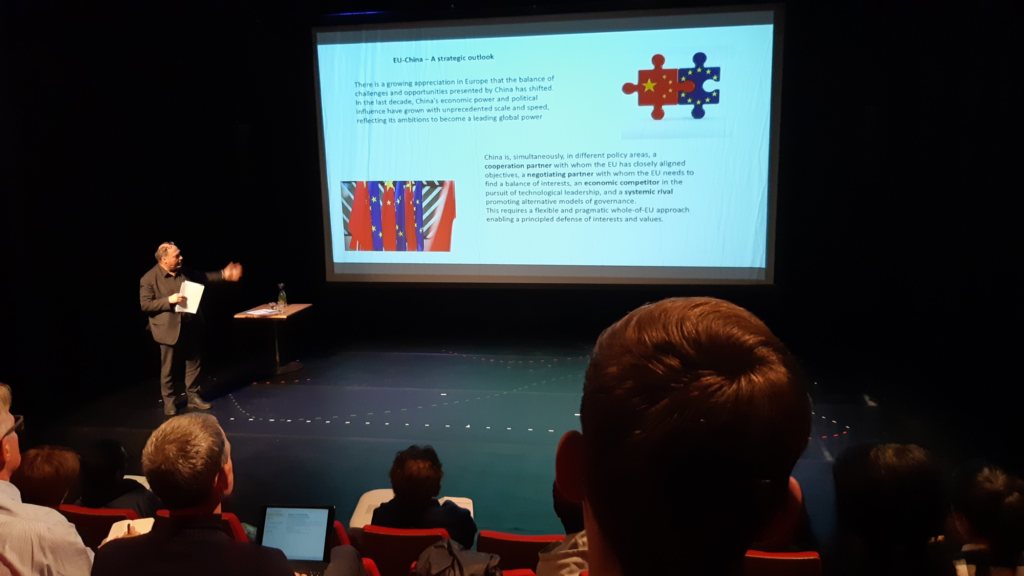 After the lecture, the students were split up into six groups to design their ideal China strategy while enjoying coffee, tea and brownies. Each group was diverse, consisting of students from different backgrounds, which resulted in various interesting discussions.

After half an hour of group discussions, each group delegated one representative to present their ideal China strategy. What has been discussed the most among the participating students appeared to be China’s 5G network. While many Western governments consider Huawei’s 5G network a security concern, the groups looked at it from a different angle. They in general considered the benefits of 5G too big for governments to overlook and explained that Huawei’s 5G network issues are mostly technical in nature and can be overcome, especially when the EU has the ability to work on reducing the risks and make sure the security measurement is done thoroughly. One of the groups also mentioned that the Netherlands should not underestimate the economic potential of China’s 5G network. Therefore, governments should not make biased decisions when dealing with China on 5G issues, as it should not in any case when economic benefits are at stake.  In response to a question raised by a member of the audience, one group recommended that the overarching strategy for the Dutch government  should be very cautious not to exclude China from all projects within the EU, given it is very likely to sabotage its future relationship with China.

In addition to technology, the groups also talked about the importance for the EU of having a common stance towards China. In order to do so, the groups came up with several strategies that could realise or improve such a common stance. For example, one group mentioned that although the EU should acknowledge China as a systemic rival given its rise in Asia, it should not forget and ignore the fact that the rest of Asia is rising as well. Therefore, the EU should focus more on Asia as a whole, instead of only giving its attention to China. That group also argued that the EU places too much emphasis on its economic and political relationship with China, whereas other areas, including cultural and social aspects, are rarely mentioned or emphasised within China strategies. Adding to this point, two other groups suggested that more initiatives should be encouraged to talk about what engaging China actually means. They mentioned that it is important to tackle the knowledge gap regarding China that exists among the public in Western countries. This could be done through, for example, public debates and different forms of workshops to encourage the public to participate. Thereafter, a common EU stance towards China can be realised. 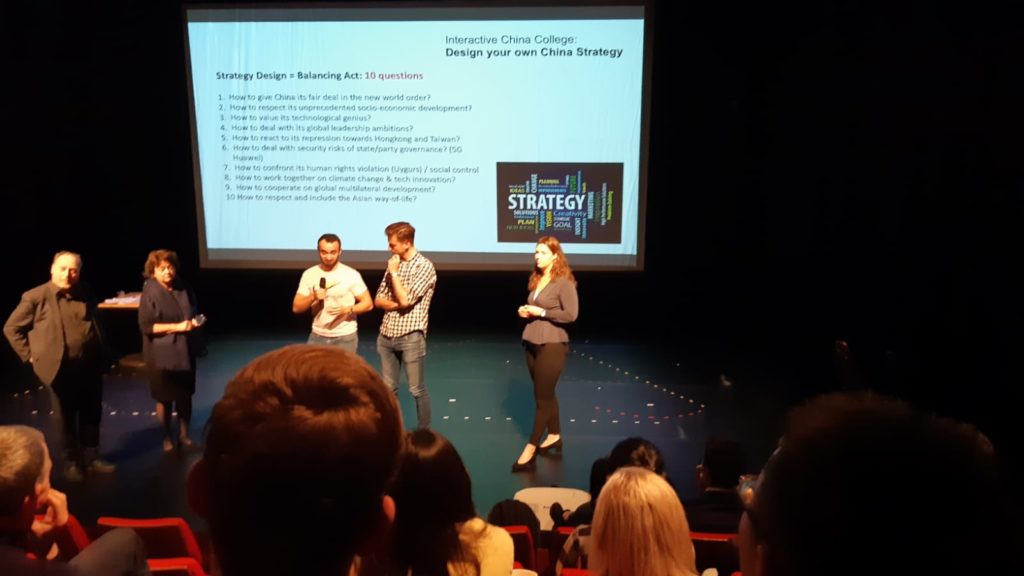 It was enlightening to see that the students came up with very fruitful and stimulating ideas in terms of designing their strategy towards China. At the end of the lecture, René Cuperus encouraged all students to think critically on what their strategy should look like and how their strategy came about. His closing remark stated that what makes each strategy remarkable and special is the fact that it reflects exactly how its creators perceive themselves, China and the world.

This lecture was followed by a theatre performance on Millennials in East Asia, performed by Lucas De Man, at the National Theatre in The Hague.