On Tuesday June 18th in The Hague, Filipina author and journalist Marites Dañguilan Vitug will discuss the 2016 South China Sea Arbitration based on her most recent book ‘Rock Solid: How the Philippines Won Its Maritime Case Against China’ (2018).(6) The topic will be considered from an international and Chinese legal perspective by Dr. Wim Muller (Chatham House and Maastricht University) and a ‘United Nations Law of the Sea’ -perspective will be provided by Prof. Dr. Alex Oude Elferink (Utrecht University and Netherlands Institute for the Law of the Sea). Read more about the topic below or register here.

Six countries pursue overlapping claims to parts of the supposedly resource-rich South China Sea. Two of these, Taiwan and China, lay claim to practically the entire sea, including the islands, islets, reefs and shoals based on alleged ‘historical rights’ and a map dating from 1947. This claim is currently being displayed on maps by the Peoples Republic of China through the so-called ‘nine-dash-line’. This line encircles almost the entire sea until just off the coasts of Vietnam, the Philippines and even Brunei and Malaysia. China asserts that China was the first country to discover, name, explore and exploit the resources of the South China Sea Islands and the first to continuously exercise sovereign powers over them.(1) China has been reinforcing its claim by creating artificial islands on reefs and shoals and building runways, ports and military installations on top of these islands since 2013. The Philippines argue that under the United Nations Law of the Sea treaty (UNCLOS) there is no basis for such extensive claims.

In 2012, a Philippine-controlled atoll by the name of Scarborough Shoal (also called Panatag Shoal or Bajo de Masinloc in the Philippines, and Huangyan Islets and Democracy Reef in China) was the location of a tense maritime standoff that lasted for weeks, after the Philippine Navy tried to arrest Chinese poachers and the Chinese Coast Guard intervened. Eventually the sole Philippine ship left, leaving the shoal effectively under Chinese control. China subsequently limited access to the shoal, a rich fishing ground, for Filipino fishermen.

Triggered by the Scarborough Shoal incident, in 2013 the Philippines under then-President Benigno Aquino III (2010 -2016) instituted an arbitral procedure under the United Nations Convention on the Law of the Se in The Hague against the People’s Republic of China. The Philippines v. China case, also known as the South China Sea Arbitration, focused on Chinese claims of historic rights in the South China Sea and the status of certain maritime features within the nine-dash line in the South China Sea: in a legal sense, the difference between an island or a rock defines different legal entitlements to the surrounding sea area: 200 versus 12 nautical miles respectively.

On July 12, 2016, the tribunal unanimously ruled that there was no legal basis for China to claim historic rights to resources from the sea areas within the nine-dash line and that none of the land features of the Spratly Island chain met the legal requirements to provide China with the most extensive legal entitlement (‘an island’) of an exclusive economic zone of 200 nautical miles around these features.(2)

Although the Tribunal was explicitly not deciding on who holds sovereignty over Scarborough Shoal, it found that China had violated its duty to respect the traditional fishing rights of Philippine fishermen by halting access to the shoal after May 2012. Interestingly, the Tribunal also noted however that these traditional fishing rights would apply to Chinese fishermen alike if the Philippines was to prevent fishing by Chinese nationals at Scarborough Shoal.

Before the arbitral ruling (‘the award’) was rendered on July 12, 2016, few could anticipate the magnitude of the Philippine victory that was to come about. Even fewer people anticipated the unlikely and bizarre turn of events that would take place under the guidance of the then newly-elected President of the Philippines, Rodrigo Duterte, who took office only twelve days before the tribunal’s decision was issued.

During his presidential campaign, Rodrigo Duterte promised to ride on a jet-ski to the contested Spratly Islands to assert sovereignty by planting a Filipino flag on this southern archipelago. However, once elected as President, Duterte immediately decided to put aside the arbitrational ruling and mend ties with Beijing, in order to attract Chinese investments for his  ‘Build, Build, Build’-infrastructure program for the Philippines and to pursue - in his own words - an ‘independent foreign policy’ by steering the Philippines away from its traditional security-partner, the United States.(3) In aligning the country more closely with China, the new Philippine President thus considerably diminished the political leverage of the arbitration award.(4) China’s defiant reaction to the ruling was “to neither acknowledge nor accept it” and to call it “naturally null and void with no binding force.”(5)

So, while the ruling of July 12, 2016 presents a significant legal and political blow to the extensive Chinese maritime claims in the South China Sea, by no means does it mark the end of the maritime disputes and confrontations over the disputed waters, shoals, reefs and islands. It also remains to be seen how the Chinese attitude towards this particular ruling sets the stage for future developments regarding the Chinese acceptance of international law.

Vitug narrates the story of the arbitration case that was filed by the Philippines against China in 2013, following the Chinese seizure of a Philippine controlled atoll in the South China Sea one year earlier after a maritime standoff which lasted several weeks. It contains a Filipino perspective on a legal confrontation that resembles the biblical story of David and Goliath. While in this case, the Chinese giant did not enter the legal arena against its smaller neighbour, the 2016 ruling presented a significant loss for China.

In her comprehensively researched book Vitug guides us through the ins and outs of the landmark legal arbitration case in an accessible journalistic style and language. With a keen eye, Vitug observes internal strife, political drama and historical background, while avoiding getting lost in legal jargon. Making use of a wide variety of sources including the transcripts of the tribunal’s hearings and interviews with numerous main actors, Vitug thus paints a readable and in-depth picture of the arbitration case that goes beyond the mere legal merits:

“Why did the Philippines sue China? What led to this brave decision? What were the hurdles that had to be overcome? How did the Philippines frame the case and build it in such a compelling manner? Who were the main actors? What was the outcome of the case and its impact?” These are the core questions guiding Marites Vitug in the writing of the book. An interesting observation is made when she writes: “It dawned on me as I was doing my research, that filing a case against China before an international tribunal was a very big deal.”

On Tuesday June 18th in The Hague, Filipina author and journalist Marites Dañguilan Vitug will discuss the 2016 South China Sea Arbitration based on her most recent book ‘Rock Solid: How the Philippines Won Its Maritime Case Against China’ (2018).(6) The topic will be considered from an international and Chinese legal perspective by Dr. Wim Muller (Chatham House and Maastricht University) and a ‘United Nations Law of the Sea’ -perspective will be provided by Prof. Dr. Alex Oude Elferink (Utrecht University and Netherlands Institute for the Law of the Sea). You can register for the event here.

The speakers and the subsequent Q&A discussion forum will focus on identifying lessons that can be learned from the South China Sea disputes, the arbitration case and China’s reaction: Which lessons can be learned for a continent that is currently struggling to develop a new approach to China’s ascendance with the Belt & Road Initiative making inroads into Europe?

Marites Dañguilan Vitug is one of the Philippines' most respected investigative journalists, winning public recognition for her books and reporting  on Philippine justice, security, and political affairs. She is the author of, amongst others, ‘Shadow of Doubt, Probing the Supreme Court’, which exposed critical weaknesses in the country's highest court and she has won a number of awards including the Philippine National Book Award in journalism for her book "Power from the Forest: the Politics of Logging." Marites Vitug is Chair of the Board at Newsbreak/ Public Trust Media Group, Inc., a Philippine investigative journalism magazine and Editor-at-Large at Rappler, an independent Philippine news platform.

Prof. Dr. Alex Oude Elferink is the director of the Netherlands Institute for the Law of the Sea (NILOS) at Utrecht University. He is also Adjunct Professor at the K.G. Jebsen Centre for the law of the sea, University of Tromsø. His expertise is in the field of public international law, with a focus on the law of the sea. He is both involved in academic legal research and consultancy work and the teaching of the law of the sea. Alex Oude Elferink is author of, amongst others, The South China Sea Arbitration’s Interpretation of Article 121(3) of the LOSC: A Disquieting First (2016). 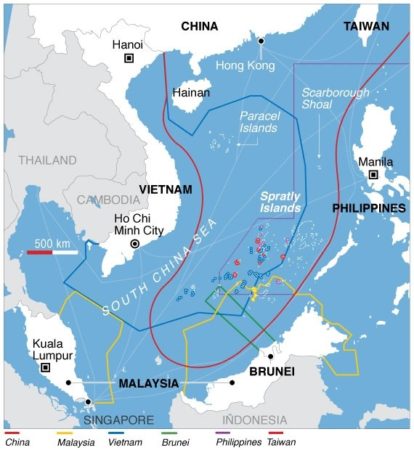