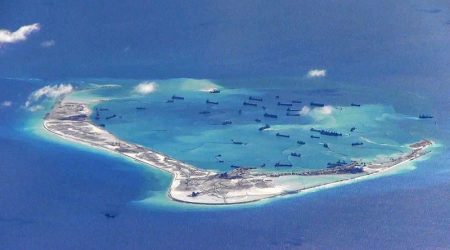 On the 8th of November, AMT (Leiden University’s Asian Modernities and Traditions project) organises a workshop on the relationship between law and power in maritime and territorial disputes in the South China Sea.

During the past decade, the South China Sea has become a theatre for great and middle power rivalry and a test of the utility of international law in managing and resolving international disputes. Disputes over the status of islands claimed by a number of states in the region, and over freedom of navigation in one of the world’s busiest shipping lanes, have become tenser in recent years as China has been pressing in its claims more strongly while the US has signalled its determination to maintain the status quo. Realist scholars of international relations expect power to be the decisive factor in shaping the outcome of these disputes. China’s rejection of the 2016 ruling by the South China Sea Arbitration tribunal in favour of the Philippines seems to support this judgment, yet closer attention to the role of law and norms in the regional historical context suggests that commitment to them is sometimes more than rhetorical. China’s attitude to international law and norms is better described as ambivalent, as it is also concerned to present itself as a ‘responsible great power’. There are theoretical grounds for explaining China’s challenge to international law and norms as a function of its status as a rising hegemon, given the role they play in maintaining the status quo; on this basis, we might expect China’s commitment to law and norms to increase if it supplants the US as regional hegemon. Other regional actors such as Japan, Taiwan, South Korea, Australia, and the ASEAN states also appeal to international law and multilateral institutional initiatives. While such behaviour may in many cases be a strategic response to material weakness, as realist theories would suggest, resort to law and multilateral cooperation by middle-power states is too selective to be adequately explained by power alone. Recent territorial disputes in the South China Sea therefore provide us with a fruitful historical context for examining the role of law and power in regional international conflict.

For more information and the programme, see AMT’s website.