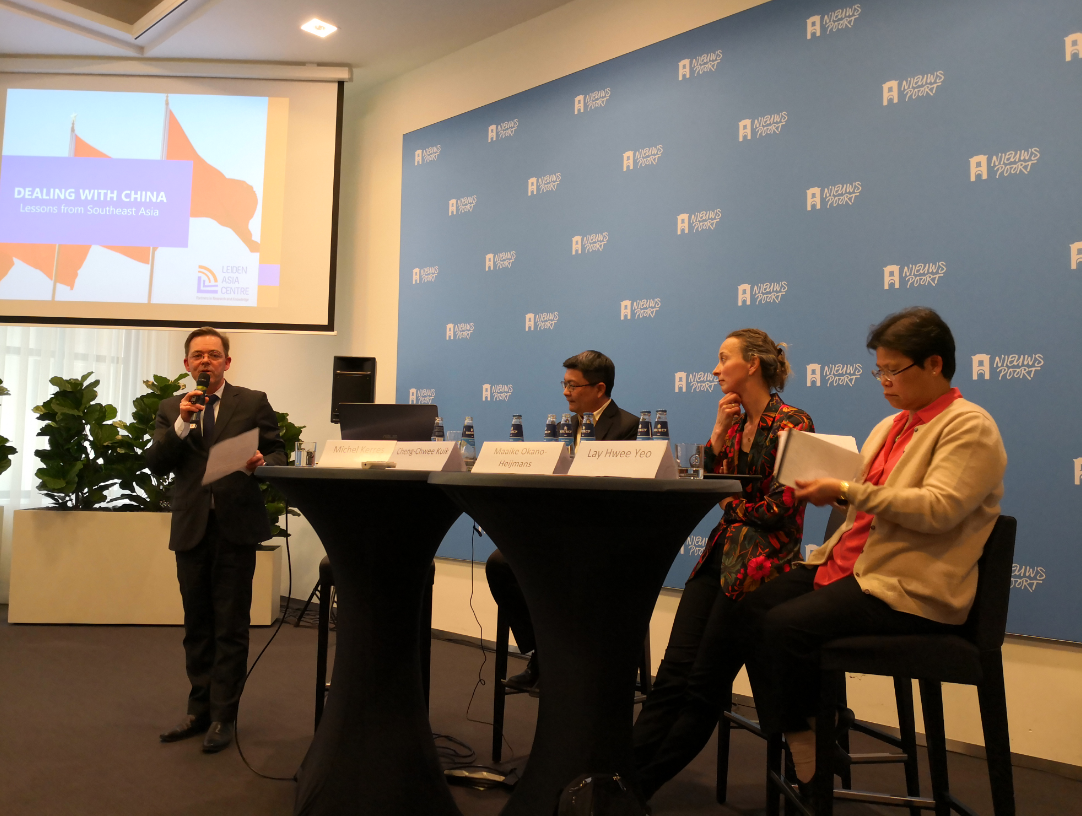 Southeast Asia is one of the focal points of the Belt and Road Initiative (BRI): many of the BRI investments, both related to maritime and land projects, are targeting Southeast Asia. However, besides varying in nature, the outcomes of and responses to these investments are also very diverse. Therefore, Southeast Asia presents lessons for Europe on how to respond to Chinese investments. Against this backdrop, the LeidenAsiaCentre organised another instalment of the Asian Current Affairs Forum (ACAF) to discuss such potential lessons with guest speakers Dr. Cheng-Chwee Kuik (Institute of Malaysian and International Studies), Dr. Lay Hwee Yeo (European Union Centre, Singapore) and Dr. Maaike Okano-Heijmans (the Clingendael Institute, moderated by Michel Kerres (diplomatic correspondent at NRC).

After the opening words by Lily Sprangers (LeidenAsiaCentre) and Michel Kerres, Dr. Cheng-Chwee Kuik introduced the relationships between Southeast Asian states and China using three factors: power, proximity, and politics. There is a large power gap between these states and China, which only intensifies as a result of their close geographical proximity. However, ultimately it is politics that characterises the relationships between China and Southeast Asian states. Because of this, there are significant differences between the countries’ respective responses to China. For instance, Laos has essentially been forced to engage with China, as the leadership regards Chinese investments as the only way to bridge the development gap between themselves and developed nations. On the other hand, other similarly-sized countries allow only limited Chinese investment or broker Japanese or even Indian influence in the region to get advantageous deals or bypass China altogether. Therefore, we can learn that politics is of foremost importance, not economics. On top of that, the presence of viable alternatives to the BRI is key to understanding the responses of different countries.

As second speaker of the event, Dr. Lay Hwee Yeo focussed on Southeast Asia – Europe and Europe – China relations. Just like Dr. Kuik, she emphasised that the small size of Southeast Asian states does not mean they are powerless. The EU – China relationship is therefore also not just about power. According to Dr. Yeo, the problem with the EU is that it came of age in 1992 with the Maastricht Treaty, at the height of the post-cold war euphoria and the supposed victory of liberal capitalism. Therefore, the language towards China from that period onwards was: “we are going to positively transform you”. In other words, there is a lack of humility on the EU’s side.

Dr. Yeo pointed out that in the current stage, the EU is starting to realise that this might not come true. In fact, the EU has totally turned around, and now suddenly sees China as a big threat. It swings from the one extreme to another. The EU still has many resources and strengths, it is all about how it uses them. Thus, it needs more confidence in its engagement with China, but without the arrogance from the post-cold war era.

As the final speaker, Dr. Maaike Okano-Heijmans discussed the BRI in the broader context of other connectivity initiatives. In fact, many ongoing initiatives started outside of the BRI context and had the label “BRI” put on them in a later phase.

She argued that the EU is waking up from its geopolitical holiday. The EU thought for a long time that geopolitical great power relations did not matter anymore, but it is slowly realising that this is not the case. The issue however is that the EU is currently too occupied with internal politics, which is a result of not properly acknowledging certain internal issues for a long time. Nevertheless, the EU has now launched its own connectivity initiative, which features a normative aspect: the investments have to be sustainable and rules-based. In other words, it is very much aimed to counter China’s BRI initiative.

Finally, there was time for questions from the audience. Do Southeast Asian states feel like China is trying to export and impose its norms in the region? According to Dr. Yeo, the answer is yes, but this feels very similar to what the EU does in Southeast Asia. The EU thinks it has a soft approach, but from the receiving countries’ perspective, it still looks like the EU is forcing its norms upon the rest of the world.

The discussion on 5G networks also came up here as a hot topic in Southeast Asia. Singapore chose Ericsson to develop their 5G network, whereas Malaysia is leveraging their position in the middle of a power struggle between the United States and China to broker a better deal.

In general, the panellists argued that it is wise to become more cautious and aware of the relationship with China, but there were different approaches on what this exactly should entail. Dr. Yeo stated she prefers a practical, more pragmatic, passive opposition to China. Dr. Kuik presented a view of the current Malaysian government, which is very aware of China’s “face” and acts upon this. The government of Malaysia is highly critical of some of the BRI projects that have been undertaken under its previous administration, but does not directly blame China for it. Instead, it has cancelled the agreements and blamed the previous administration for the difficulties. Moreover, when China attempts to strike a deal that is not in favor of the Malaysians, the government refers back to the “unequal treaties” of 19th century China. This way, it speaks the language of the Chinese to get its way.