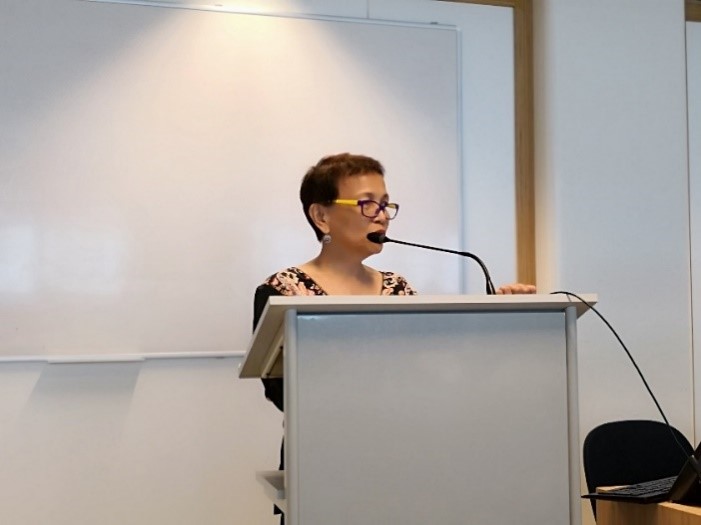 In 2013, the Philippines sued China at the United Nations Permanent Court of Arbitration concerning its actions in the South China Sea. Three years later, this UN arbitral tribunal under the UN Law of the Sea ruled that there is “no legal basis” for China’s so-called “nine-dash line” in the South China Sea (see our article here for more background on this topic), thereby marking a resounding success for the Philippines in this case. To discuss this case, on the 18th of June the LeidenAsiaCentre organised the Asian Current Affairs Forum (ACAF) with special guest Marites Dañguilan Vitug, author of the book “Rock Solid, How the Philippines Won Its Maritime Case against China”. Joining her were moderator Michel Kerres (diplomatic correspondent, NRC) and speakers Prof. Alex Oude Elferink (Utrecht University) and Dr Wim Muller (Maastricht University). 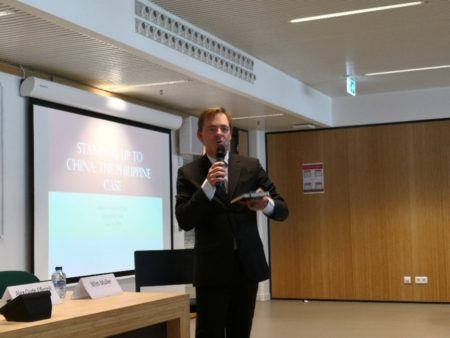 Opening this month’s ACAF, Michel Kerres introduced one salient detail of the South China Sea ruling: already a month before the official verdict, the Chinese government held a press conference giving nine reasons why they did not agree with the outcomes of the tribunal. The spokesperson of this press conference was Xu Hong, who only recently became the new Chinese ambassador to The Netherlands. 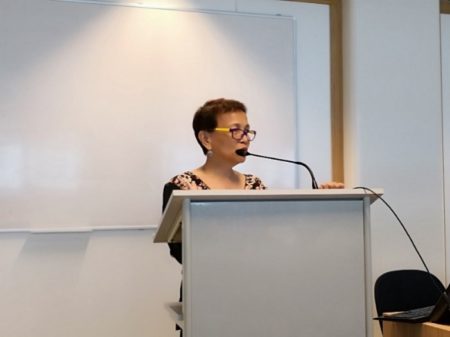 After this introduction, Marites Dañguilan Vitug introduced the story behind her book. While she at first dismissed the South China Sea conflict as merely “rocks, riffs and sandbanks”, she later found out these have a geopolitical story in contentious waters. If dominated by one country, this will have an impact on the entire Southeast Asian region. The tension surrounding these rocks also became clear to her when she visited one of the islands: while she was there for only half a day, she saw Chinese ships patrolling the area.

According to Vitug, the conflict came to the forefront in 2011 when China stopped the Philippines from exploiting the oil and gas reserves in the area claimed by the Philippines. Two years later, the Philippines’ president Aquino decided to take China to court. This was a controversial decision, as even within the Philippines people opposed challenging the more powerful China. However, as one expert put it, the law is the great equalizer between big countries and small countries. The head lawyer of the Philippine team also stated that “there is nowhere on earth where the Philippines can stand up against China, except in a court”. Indeed, the five judges of the court unanimously ruled in favour of the Philippines, declaring that China’s claim to the nine-dash line is illegal and that China violates the sovereign rights of the Philippines.

Nevertheless, this does not mean the conflict is resolved. As Michel Kerres already noted, China does not accept the ruling and did not participate in the tribunal. Moreover, the new president of the Philippines Duterte has temporarily shelved the ruling. . Duterte has a more positive, pragmatic approach towards China as it is a source of investment, tourism and even of weapons, while remaining silent on the recent human rights violations.

Alex Oude Elferink in front of a full house at Wijnhaven

The second speaker, Prof. Alex Oude Elferink provided a legal perspective by looking at the United Nations Law of the Sea that was used as the basis of the ruling. He argued that it was a very complex case, but one that was particularly remarkable from the question of jurisdiction. Before taking on a case, the tribunal needs to affirm jurisdiction on the issue. Once jurisdiction is granted, section 15 of the UN law provides for “compulsory settlement” of disputes through arbitration like in this case. Yet, another section of the law suggests that certain disputes should be solved through friendly consultations and regulations, rather than dispute settlement. Therefore, should the tribunal have been granted jurisdiction in the first place? This is made especially difficult because the Law of the Sea does not explicitly make any mention of historic rights – one of the factors that China has based its claims on.

The second part of Oude Elferink’s talk was on China’s perspective on the tribunal. Even though China did not participate, it was clearly concerned with the award and had attempted to influence the court case. Nevertheless, even if China would have participated and historic rights would have been part of it, Oude Elferink argued that its case would not have been very convincing. The historic rights China bases its claim on is – for instance – the travels of Admiral Zheng. However, these historic events are not a historic right of ownership. 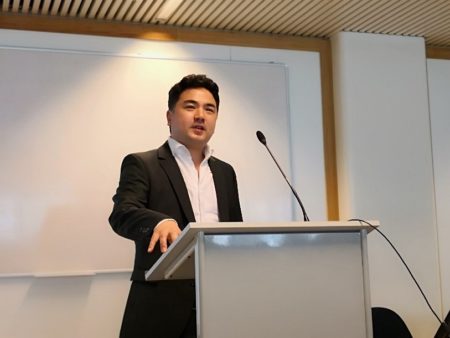 Wim Muller on the Chinese perspective

Finally, Wim Muller elaborated further upon how China views the ruling, focussing on the international legal order. According to him, even though the issue is presented as a “David versus Goliath” struggle with a far more powerful China, there, in fact, is deep insecurity on the side of the Chinese government towards international law. Its position on international law is pegged in its understanding of the international order, which it only became acquainted with after the opium wars. During these wars, the Chinese world order was overthrown and instead, China became integrated into a highly unequal order. Therefore, it also feels insecure about contemporary international law. Nevertheless, it also supports international law, and in particular the principle of sovereignty.

Because of its emphasis on sovereignty, China does not want to give away its own sovereign power to interpret international laws. Moreover, it still believes that international organisations are biased against China. Thus, its fixed policy is to never accept the jurisdiction of any tribunal (the World Trade Organisation dispute settlement system as the main exception). It had therefore also expected the Philippines to attempt to settle the dispute through bilateral means, rather than through the tribunal. Moreover, Muller argued that China’s attempts to influence the ruling by approaching the judges informally worked adversely as the judges regarded this as an offence to their integrity.

In conclusion, both Muller and Oude Elferink agreed that international law was important to China and that the verdict did matter, even though China did not abide by the ruling. But then how to proceed forward? This was central to many questions from the audience for all three speakers. For instance, can conflict occur? The speakers were unanimous that war does not appear likely. Oude Elferink stated that although there have already been a number of conflicts – even violent ones – it never escalated, because all states calculate the risks they are running, and no one is looking for an armed conflict. Marites Vitug added to this that for the Philippines, war is never an option because it simply cannot win it. Another question concerned the role of the United States and their relationship with the present-day Duterte administration. To this, Vitug answered that the military still has a strong relationship to the United States, and although Duterte stated he would reduce military exercises with the US, they have in fact increased.

In the end, one suggestion for the future was brought forward: maybe the best would be to take the status-quo and formalise that as the new demarcation of territory, rather than demanding China to fully abandon its claims. And maybe Europe could play the role of a neutral, honest broker in achieving this deal.

The seminar was also picked up by international media, with the Philippine ABS-CBN network headlining “Filipinos urged to ‘keep talking’ about legal victory vs China“.